Visitors to Portugal have been steadily increasing year upon year, but what is it that makes this country so intriguing to visit? Here, we’ve listed some of the top reasons why you should be putting Portugal at the top of your destination list…

The capital of Portugal presents a stunning showcase of what the country has to offer; from awe-inspiring hilltop locations along the Tegus river, to the cobble stone alleyways of the old Moorish Alfama quarter and the Baixa districts bygone heritage. You’ll find old century yellow wooden trams and discover the beautiful mosaic square Praça do Comércio surrounded by 18th Century old arcadres and ornate facades. 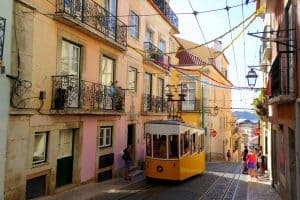 Portugal’s second city is a strong rival, hosting a colourful mix of medieval relics, magnificent gold-leaf-laced churches, a slight contemporary buzz and the Cais da Ribeira riverfront bustling with bars, restaurants and cafes. Here you will find a mixture of tall old buildings made from granite and tile lining the river front, a maze of narrow streets that lie behind and underneath it all, Roman ruins. 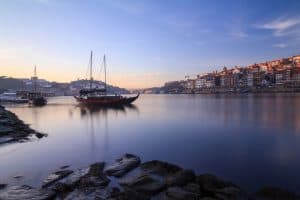 Along the Riviera in Porto

The city attracts some of the world’s best rock, electro and jazz musicians; don’t miss the cutting edge Musea de Arte Contemporânea and the concert space the Casa da Música. Head to a wine cave for a tasting and enjoy the sights and sounds.

The Portuguese are some of the biggest wine consumers (per capita) in the world (4th to be exact), so they certainly know what they’re doing. The national drink (port or porto) is sold all over and is increasingly becoming recognised worldwide for its exquisite flavour and rich quality.

Wine production is one of Portugal’s more ancient traditions and the country is home to hundreds of award-winning wines. If you’re a wine enthusiast, make sure to explore the Douro Valley and the Alentejo region for a wine tour.

These delicious custard tarts (or pastel de natas, as they’re called in Portugal) are truly unique. You will find queues for the sweet, rich and perfectly crisp tarts often stretch along the pavement, as they arguable take the prize for the most delicious pastry. Find some of the best ones at Pastéis de Belém (in Belém) and at Manteigaria (in Largo do Camões). 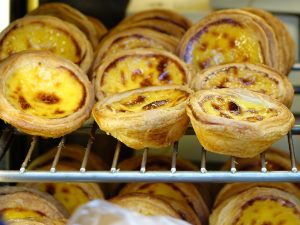 As you walk around Porto, don’t be surprised if you feel a bit of magic in the air. It was here that JK Rowling was inspired for her infamous Harry Potter series when she taught English in the 1990’s. The author spent many afternoons writing at Café Majestic and at Palácio de Cristal (Crystal Palace). Make sure to also take a step inside the sumptuous Livraria Lello (Lello Bookstore) in the city. It may look eerily familiar: that’s because this 100-year-old bookstore was Rowling’s inspiration for creating the Hogwarts Library. 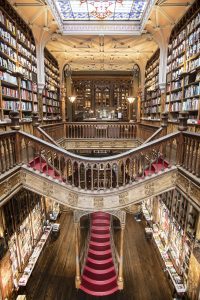 On the western edge of Europe, Lisbon boasts as the continent’s sunniest capital city, recording an average of 2,799 hours of sunshine per year (that’s slightly up on Athens, which has 2,771 hours of sun a year). And at the end of the day you’ll be rewarded with a romantic pink-and-orange sunset right over the ocean.

With all that sunshine, it’s ideal that Portugal also boasts an exquisite coastline, making it one of Europe’s best destinations for a beach break. Read our blog on the best hidden beaches near Lisbon and Portugal here. More than 100 beaches gives you the licence to explore the coastline. Some of the most beautiful are Comporta and Figueirinha. Surfers will also enjoy the swell of the Atlantic Ocean with a wave for all surfing abilities and relatively uncrowded breaks. 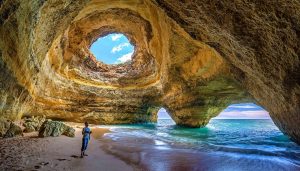 Hidden beaches along the coast of Portugal

Once you’ve added Lisbon and Porto to your itinerary, make sure to check out some other destinations such as Guimarães, Tavira and Sintra, where you ca uncover original Portugese cities before tourism came along. Check out our blog on Sintra – where fairytales come to life in the narrow alleyways and royal castles.

If you want to understand the heart of the Portuguese (and learn what saudade really means), head to a Fado house and listen to the traditional and distincive fado music. This style of music is predominantly slow, resigned and melancholic in character. Lyrical and soulful, it is accompanied by guitars – the Spanish-style guitar known in Portuguese as viola and the Portuguese pear-shaped guitarra. Our Best of Portugal tour includes dinner and a traditional Fado show, however if you want to experience more we recommend you head to Sr. Vinho and Clube de Fado  in Lisbon. 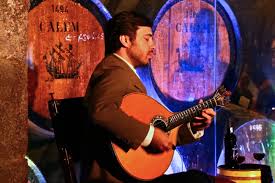 Time and time again, Portugal has been named as one of the best destinations in Europe if you want to keep to a budget. You’ll be able to treat yourself to some upmarket hotels, as well as enjoy Europe’s history and charm for half the price!

If you would like to join our Best of Portugal tour, or have us create a bespoke itinerary through Portugal for you, simply contact us today for a free quote.