5 Sicilian Towns You Must Visit Sicily’s historic roots run deep. From Greek and Roman settlements to a series of foreign control from the Arabs, Normans, and other European ruling families. This cultural mix combined with spectacular natural beauty has led to fascinating destinations that appeal to visitors today.

Here are five don’t miss towns to be sure to add to your Sicily trip planning. Join us on our 10-day Sicily Bella Small Group tour to see these and more highlights of this spectacular island! With so much history, there’s no wonder Sicily is on our must see UNESCO World Heritage destinations list – read more here.

Southwest of Palermo on the island’s north coast in the village of Monreale. Here sits a fabulous Norman cathedral that has been named a UNESCO World Heritage Site.

Norman King William II brought the finest Arab and Byzantine craftsmen to build his cathedral in the 12th century. The spectacular interior features dazzling golden mosaic works, from a massive Christ figure to biblical stories and scenes from the life of Christ. William also built an abbey next to his cathedral. In the cloisters that remain today, you can see an amazing architectural ensemble of magnificently carved double columns. They are decorated with glittering glass mosaics and featuring an intricate array of carved figures of animals, medieval people, and mythical creatures.

The charming seaside village of Cefalù features a second stunning Norman church, Cefalù Cathedral, also named a UNESCO World Heritage Site. The town is spectacularly set between the Tyrrhenian Sea and La Rocca, a monumental rock providing the backdrop for the town.

Norman King Roger II began having his church built in 1131. The incredible gold mosaic-filled church reflects its Norman roots and the artistic endeavours of Byzantine craftsmen. The two-towered cathedral towers over the old town.

Explore Cefalù with a ramble down Corso Ruggero. Take in the picturesque harbour and look for other medieval architectural remnants. These include the Lavatoio, a washhouse carved out of the rock, and the Osterio Magno, the surviving part of large 13th century palace. Those with sufficient stamina can climb the stairs up to the top of La Rocca, where you’ll find the ancient ruins of a Temple of Diana, old fortifications, and spectacular views.

Syracuse was once one of the most powerful Greek city states. Its rich trove of Greek antiquities and atmospheric old town of Ortigia island have been named a UNESCO World Heritage Site.

Delve into the narrow streets and alleys of the old town on Ortigia island, lined with beautiful Baroque churches and palaces. The ruins of an ancient Temple of Apollo greet visitors as they enter the island.

The Syracuse Duomo square and cathedral

The city’s Baroque cathedral incorporated the ancient past by building one of its walls around a series of columns from an ancient Temple of Athena. Set in the attractive Piazza del Duomo, the Cathedral is complemented by other admirable buildings such as the Episcopal Palace and Town Hall from the 17th and 18th centuries.

You’ll find an array of history In the Neapolis Archaeological Park. There is a 5th century Greek Theatre, a Roman amphitheatre, an ancient quarry, and extensive underground catacombs. Delve further into the past at the city’s archaeological museum, while art lovers will want to stop into the Regional Museum of Medieval and Modern Art to view its Baroque and Renaissance works. Survey the scenic entrance to the bay from the 13th century Maniace Castle set commandingly at the tip of the island. Ragusa is one of the best of the Val di Noto towns to see spectacular examples of Sicilian Baroque architecture. The city is one of 8 Val di Noto towns awarded UNESCO World Heritage Site for their marvellous Baroque-style buildings. They were constructed after the destruction caused by a massive 1693 earthquake.

Ragusa is a two-part town separated by a deep ravine. Here, Ragusa Superiore perched higher than the old town of Ragusa Ibla. It is the fairy-tale like Ragusa Ibla that draws visitors, to see the houses and churches cascading down its hillside. The two parts of town are connected by the spectacular Santa Maria della Scala steps that afford stunning vistas as you walk down winding paths. 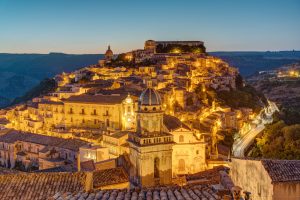 The old town of Ragusa Ibla in Sicily before sunrise

Highlights of a visit to Ragusa Ibla include stopping into the marvellous 18th century Baroque Duomo of San Giorgio. It features a tiered wedding cake-like exterior, and stunning viewpoints from the Ibleo Gardens.

Ragusa Superiore offers a pair of worthy sites. Including the 18th century Cathedral of San Giovanni with its ornate Baroque and Rococo interior, and the rich collections of the Ibleo Regional Archaeological Museum.

Perched high above the eastern coast is the photogenic village of Taormina. It provides awe -inspiring vistas of the sea and dramatic Mount Etna. The chief attraction is the stunningly situated 3rd century BC Greek amphitheatre, perched on high with views out over the Ionian Sea and distant Mount Etna. 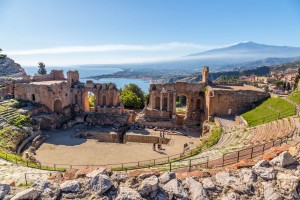 A walk along the main street of Corso Umberto will introduce you to Taormina’s charming setting. From the panoramic terrace of the Piazza IX April, you’ll get one of the town’s best viewpoints, out over the Bay of Naxos and Mount Etna. More spectacular views can be enjoyed from the late 19th century Villa Communale Public Gardens.

Remnants of the city’s ancient past can be seen all over. The Greek Theatre, the Roman ruins of the Naumachie, historic palaces such as the 15th century Palazzo Corvaja with its Museum of Art and Folk Traditions, and the 13th century Cathedral of San Nicolo in the Piazza del Duomo with its beautiful Baroque fountain.
The Madonna della Rocca church sits high above the town and affords sweeping views. Head down to the pebbled beach at Mazzaro by cable car. Here you can stroll or wade out to the Isola Bella, a small rocky island with paths and wonderful views.

Sicily’s dizzying array of historical rulers created a fascinating blend of sights that make Sicily such an intriguing destination. These five towns should be part of any Sicily itinerary. Let us help you plan your Sicily adventure or book your space on our 10-day Sicily Bella Small Group Journey for a wonderful introduction to this beautiful and distinctive island.