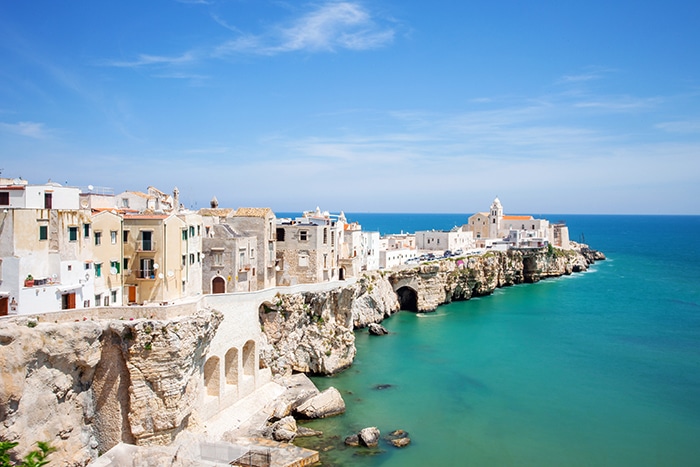 Italy’s Undiscovered Locations: The Hidden Gems of Puglia – Getting off the tourist trail is always an exciting experience that allows you to explore and discover further. The culture, the people and the tastes of local Italian become more authentic as you step off the beaten track. Across Italy it’s almost guaranteed that you will find small spots that you’ve never heard of. There are incredible destinations in Italy that are often overlooked by travelers, but are just around the corner, if you know where to look. Follow our series of “Italy’s Undiscovered Locations” to unlock some of these idyllic locations…

Puglia – lost and forgotten across history and still today as tourists flock to the most southern tip of popular Salento. Yet this region of Italy has so much to offer including olive groves and amazing restaurants with local dishes, Medieval hilltop towns, a rich history and surprisingly Europe’s largest colony of pink flamingos. Visit Puglia on our fully customisable Regional Discovery – see the suggested itinerary here.

Just north-west of Salento, the ancient settlement of Valle d’Itria is so profound and well kept it has been given UNESCO World Heritage status. The area is famous for it’s trulli, small beehive styles stone dwellings scattered across the midst of mature olive trees. Amongst its narrow streets, Alberobello has around 1400 trulli throughout its maze of cobble streets. The town is also famous for its white decorative status, striking to view across the landscape. Check out the white historic quarters of Cisternino, Martina Franca, Ceglie Messapica, Ostuni and Locorotondo. Stay in a traditional trulli home on our Regional Discovery of Puglia – see the suggested itinerary here.

Flamingos have only been nesting in Italy for a few decades, and if you want to catch a glimpse then head north up the coast to the Sentiero Airone Nature Reserve. The reserve is situated between the Gargano national park of the northern peninsula, and the Murgia national park. Here is also where you will find caves and plateaus of limestone where up to 30,000 dinosaur footprints have been discovered. Situated on a hilltop over the Adriatic Sea, Ostuni is set out like a maze, yet hosts some of the areas most exclusive resorts. There was clearly no town planning in the area, as you get lost amongst    alleyways, starcases and arches you will notice that there are buildings on top of buildings, reinforced by strong archways that make up for the lack of foundations.

The history of the white houses is somewhat comical, as the locals attributed them with less deaths from the plague (in the 17th Century). Therefore infected houses were painted by mixing limestone dust with water. Today, the white houses attract plenty of tourists and the local government encourgaes them to be repainted every two years. For all that Puglia has to offer, it remains charmingly undiscovered and unspoiled in Italy. With major cities in the region offering beautiful sandy beaches, rocky limestone cliffs and endless vineyards. It is likely that Puglia isn’t the first place you think of when contemplating great beach resorts. However, it is a land of sea and sun, with cultural heritage, and mysterious sites. Organise a Private Journey here with Ormina Tours and include guided tours of the areas historic sites, as well as leisure time to enjoy the local culture. See our suggested itinerary here.