The Douro Valley is a beautiful area of northern Portugal that showcases the Douro River and the terraced vineyards lining its steep banks. This is the oldest demarcated wine region in the world (since 1756) and is a UNESCO World Heritage Site. The Douro is only one of Portugal’s wine regions but it’s certainly the best known. You can visit the Douro Valley on our Best of Portugal Small Group Journey – discover more here!

Rolling hills of the Douro Valley

Visit its charming, whitewashed 18th century winery estates known as quintas to enjoy tastings or take a cruise along the river. Seek out viewpoints like the Casal de Loivos to enjoy spectacular vistas of the surrounding landscape. Explore small winemaking villages by car or bike and sample the famous local port wines. Learn about the region’s wine heritage at the Douro Museum in Peso da Régua. Admire Lamego’s baroque hilltop chapel atop its flight of blue and white-tiled steps and visit Provesende to see its ancient cottages and cobbled town square. Read more to discover Portugal’s amazing Douro Valley Wine Region.

An Overview of Portuguese Wine

Portugal may be most famous for its Port and Madeira fortified wines. Yet it is gaining an international reputation for the quality of its other wines as well. Portugal has over 250 indigenous grapes! Many of these do not grow anywhere else in the world.

The Douro valley is the most famous wine region, and it is here where the famous port wine is grown. The beauty of the region, combined with the agricultural landscaping of the terraced vineyards, led to the Douro region being recognised as a UNESCO World Heritage Site. There are 14 wine regions across Portugal. Terrain varies from the mountains to near the ocean. Wine producing regions include the Douro Valley, Minho where Vinho Verde is grown, the Lisbon area, the Algarve in the south, Setúbal with its Moscatel dessert wine, the Dão and Alentejo regions, as well as the islands of Madeira and the Azores.

Port is the most famous Portuguese wine, a sweet dessert wine. The red variety is grown from grapes such as Touriga Nacional and Tinta Roriz on the terraced hillsides of the Douro River Valley. The wine is fortified, meaning that partway through the fermentation process, brandy is added to the wine. This results in a higher level of remaining grape sugar, heightening the wine’s sweetness. The fortification and aging processes for port takes place in the famous port houses of the city of Porto, located at the mouth of the Douro River on Portugal’s west coast. 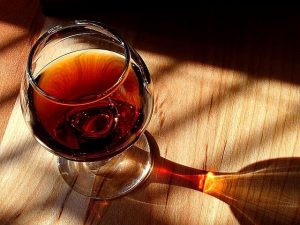 Portugal is most famous for Port Wine

Principal types of port include:

Another well-known Portuguese wine is Vinho Verde. Although it translates as ‘green wine’, it is most often a white blend made from the Loureiro or Alvarinho grapes. It is a very popular, light wine that is low in alcohol. The Vinho Verde wines are young, not aged in oak, and are intended to be consumed right away.

Wine growing in the Douro Valley

In choosing a Portuguese wine, consider first the quality level, of which there are three:

Wines of the Douro Valley

The stunning terraced hillsides of the Douro River have been producing the famous port wine for centuries. In the past few decades the area is becoming well respected for dry red and white wines as well. In fact, total Douro region production is evenly split between Port and the non-fortified red and white table wines. 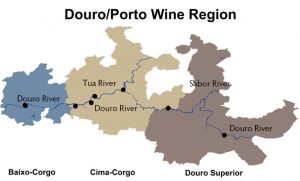 The three sub-areas of the Douro Valley, Portugal

The Douro wine region is divided into three sub areas along the river as it flows west towards the city of Porto. These include Douro Superior, the farthest east, making up about 20% of the vineyard land in the region. The central section is known as Cima Corgo, the largest of the sub regions which is centered around the village of Pinhão. It is here where almost half of the Douro Valley’s wine production occurs. The region closest to the coast is called Baixo or Lower Corgo, best suited for table wine production with its cooler, wetter climate.The same red grape varietals used to make port are used in the production of the Douro’s red wines. These grapes include Tinta Roriz, Tinta Barroca, Touriga Nacional and Touriga Franca. The red wines spend some time aging in oak and are full-bodied. Wine types used for the area’s white wines include Malvasia Fina, Viosinho, Gouveio and Rabigato.

To sample some of the best of the beautiful Douro Valley region, consider joining our 6-day Best of Portugal Tour!