Croatia was once part of the vast Roman Empire, and the archaeological legacy has left a rich trove of sites to visit. Croatia offers up a stunning array of archaeological destinations for the historically minded traveller. Below we have summarised five of the best must-visit archaeological sites for your trip to Croatia.

A great way to sample some of these treasures is to join our 11-day Beautiful Croatia Small Group Journey, during which you’ll experience the archaeological highlights of Split, Zadar and Pula.

Diocletian became emperor of Rome about 285 A.D.. He ruled for 20 years, then retired in 305 to a Palace he had constructed in the city of Split on the Adriatic coast of what is now Croatia. The Palace is the most complete remaining structure in existence and takes up a large section of Split’s Old Town. It was designated a UNESCO World Heritage Site in 1979. 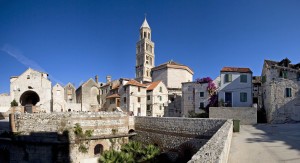 The rectangular Palace was built on a massive scale. The walls stretch over 200 yards long, and over 60 feet high. The front of the palace originally met the sea where goods were unloaded by boat at one of the 4 palace entryways – the largest and grandest called the Golden Gate. The Palace is a living organism. Today, about 3,000 people live within its walls, making it the oldest inhabited historical monument.

The Peristyle Square is a colonnaded plaza where the emperor greeted citizens. The Diocletian’s mausoleum was subsequently turned into the Cathedral St. Domnius, patron saint of Split. While the Temple of Jupiter was converted into the church’s baptistry.

The lower sections of the palace walls are now used as shops, restaurants, and museums. The labyrinthine streets and passageways lead throughout the palace structure. Many interesting finds from the Palace are now housed in Split’s Archaeological Museum.

The ruins of the Roman city of Salona are what remains of what was once the Roman capital of Dalmatia. In the 2nd century BCE it was home to 60,000 people. It is now one of the most important archaeological sites in Croatia. It was the birthplace of the emperor Diocletian.

Salona grew as a trading town and was fortified with walls and towers. Typical of Roman towns, a central Forum was built. Alongside this was a theatre, and subsequently an amphitheatre in the 2nd century AD. It could hold over 17,000 spectators! There are also remains of thermal baths built in the 3rd century. In 614 the city was destroyed by the Slavs, and its people fled to islands in the Adriatic and to the remains of Diocletian’s Palace in Split, where they established new communities.

As impressive as the ruins are, it’s amazing to note that over 90% of Salona is still unexcavated. It remains hidden beneath olive groves and fields. Many of the chief items unearthed at Salona are now housed in Split’s Archaeological Museum.

Pula is the Istrian peninsula’s largest city. It boasts a rich collection of Roman ruins. The most famous is the Pula Arena – a magnificent amphitheatre built between 27 BCE and 68 AD that is one of the best preserved in the world. It is the only one remaining that has all three architectural tiers intact along with four side towers. Originally built to host gladiator fights, the arena could hold up to 23,000 spectators. 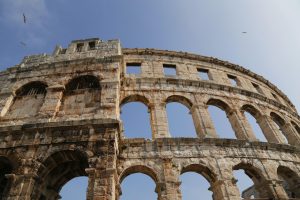 The Roman Amphitheatre of Pula

Other Roman era sights in the city include the Temple of Augustus, the Roman Forum, the Arch of the Sergii built to commemorate military victories, the Hercules Gate and spectacular Roman floor mosaics.

Zadar is a busy university town that also contains an impressive array of ruins from its Roman past. Zadar was a colony of Rome for 500 years. The most important structures are from the Roman Forum, the municipal square built in the 1st to 3rd centuries AD. Here there was an elevated Capitol building plus a temple to the honour of Jupiter, Juno, and Minerva. Several Roman era pillars survive. One which was subsequently dubbed the Pillar of Shame in the Middle Ages, when it was used to chain and pillory citizens who committed crimes. 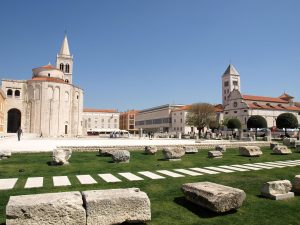 Some of the best archaeological remnants from Zadar’s Roman past are displayed in the city’s Archaeological Museum and Museum of Ancient Glass.

Zadar also has its own more modern artistic installations like the wave powered Sea Organ and is noted for glorious sunsets as seen from the Riva waterfront promenade.

Krapina is a market town north of the capital of Zagreb. It is closely associated with the Hušnjakovo excavation site. This is where the world’s greatest collection of Neanderthal bones from about 125000 BCE were dug up between 1896 and 1905.

The state-of-the-art museum at Krapina displays lifelike recreations of Neanderthal man along with multimedia displays to help tell the story of the development of early man. Over 900 fossilised Neanderthal bones were found at the site. In addition were pieces of stone tools and remains of Pleistocene era animals like the woolly mammoth, cave bear and giant deer. Croatia offers much more than a gorgeous coastline and beautiful natural scenery. It’s amazing Roman heritage provides many must-visit sites to build into your Croatian travel plans. Join us on our 11-day Beautiful Croatia tour to sample some of these highlights. We also offer a 4-day Zagreb City Break Tour that would make an excellent companion itinerary to the Croatia tour program.