Why you must visit these 3 Sites in Portugal

Portugal is home to striking architectural monuments. Most stem from the vision and direction of its King and members of the Portuguese royalty.

Portugal became of one the world’s leading seagoing powers, finding new trade routes to India through the voyage of Vasco da Gama in 1498, during the country’s golden Age of Discovery. Money flowed into the country from these spice trading enterprises and helped finance important building projects.

King Manuel I, who ruled between 1495 and 1521, ordered the construction of several notable buildings during his reign. These included the Jerónimos Monastery and the Belém Tower, both located in Belém outside of Lisbon. These two UNESCO World Heritage Sites should be on any must-see sites list when visiting Portugal. They were both built in a unique style that later came to be named Manueline.

Manueline art celebrated the country’s seafaring prowess by incorporating nautical motifs. Shells, coral, anchors, and ropes along with fanciful creatures, were included in coats of arms and religious symbols of the building’s architecture. 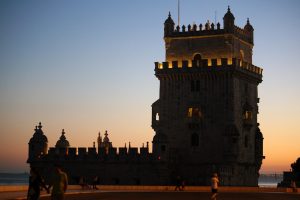 Belém Tower lights up in the sunset

The lovely town of Sintra is located a short distance north of the capital. It offers visitors an array of fanciful palaces to admire in the Romantic style popular in Europe in the mid 1800s. The most glamorous of the Sintra architectural creations is Pena Palace. A fantasy castle of turrets, balconies, ornate chambers, and gardens. Pena Palace is also a must see site on any Portuguese itinerary.

Learn more about each of these sites you must visit in Portugal!

One of the most spectacular examples of the Manueline style is embodied by the 16th century Jerónimos Monastery. It was constructed in Belém on the site of a hermitage founded by Prince Henry the Navigator. It commemorates the great naval expeditions of Portugal’s Age of Discovery. Work began in 1501 but was not completed until the 17th century. The Monastery was named a UNESCO World Heritage Site in 1983, along with the nearby Tower of Belém.

Amazing details of the ceiling of Jerónimos Monastery

The Monastery belonged to the Order of St. Jerome. The monks were charged with giving spiritual guidance to sailors. Its fanciful architecture incorporates nautical imagery such as ropes and anchors. You can also find flora and fauna from Portugal’s overseas adventures, including elephants and palm trees. The initial inspiration for the construction of the building came from the famed Portuguese explorer Vasco da Gama after his return from discovering a trade route to India.

Seafarers depicted on the nearby Padrão dos Descobrimentos

The large complex also includes the glittering church of Santa Maria. Today it houses the tomb of da Gama and an ornate two-level cloister. Beautifully carved stonework fills the church’s interior, depicting scenes from the life of St. Jerome. Decorative tiles on the walls of the former monk’s refectory illustrate the story of Joseph.

The Tomb of da Gama in Jerónimos Monastery

The double tiers of intricately carved columns of the spectacular cloisters continue the nautical themes, with depictions of coral, aquatic creatures, rope, and other sea related symbols.

The Belém Tower stands over 100 feet high on the bank of the River Tagus in Belém. Built between 1514 and 1520, it was originally part of Portugal’s defences at the mouth of the River Tagus.
The Tower was also constructed in the Manueline style with sea-based motifs incorporated into its architecture. It is the river-facing side of the façade that contains the most ornate stonework. There’s even a famous rhinoceros gargoyle, inspired by an African animal given to King Manuel I. The creature was a fanciful oddity at the time and inspired famed German artist Friedrich Durer to make a drawing. 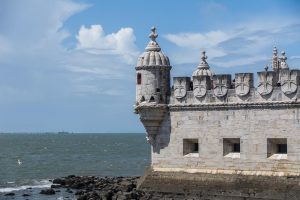 Details of the Belém Tower

Four stories rise up via narrow spiral staircases inside beautifully decorated watchtowers. From the top terrace there are sweeping views over the River Tagus estuary – a must see site. After it ceased to serve its defensive purpose, the Tower became later became a light house, customs office, and a eventually a prison. The Tower was originally built midstream in the Tagus, but as the river shifted course over the passing centuries, the Tower now sits close to the shore.

Sintra offers beautiful natural surroundings, with mountain and sea views. This led Portuguese royalty, in the 1800s, to build fanciful castles and villas in the Romantic style of the age. The most ornate example is Pena Palace. It sits on a crest about 1500 feet high, and was built on the site of St. Jerome’s monastery founded during the reign of King Manuel I. 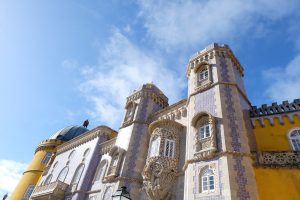 King Consort Ferdinand II of Saxe-Coburg-Gotha had the palace built starting between 1842 and 1854 by a fellow German architect, Baron Eschwege. Ferdinand was fascinated by the monastery ruins and inspired to create his own architectural fantasy here as his royal summer residence. It is an eclectic mix of architectural elements. Ranging from domes to turrets to a drawbridge. It also includes fanciful coloured buildings and rich interior decorations including a 16th century chapel, a cloister, and the royal chambers and dining room. 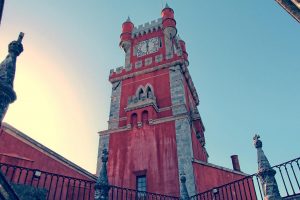 Surrounding the Palace are the lovely grounds of Pena Park, which took four years to construct. The Park’s landscaping, trees and shrubs form what is considered one of Portugal’s most spectacular parks. From the Palace, the Queen’s Terrace affords marvellous views over the park.
The last royal occupant of the palace was Queen Amelia, who left the palace in 1910. A must see site, it remains a fascinating, historic insight into royal lifestyles before the Second World War.

Experience all three of these amazing sights by joining us on our 6-day Best of Portugal Small Group Journey! Discover more and see the full itinerary here.