London offers an amazing variety of great things to do for visitors of all ages. The city caters to its youngest visitors with special children’s museums, parks, playgrounds, gardens, a zoo, and aquarium to delight the senses and keep young minds engaged.

Children will marvel at the pageantry of London. From the Changing of the Guard Ceremony at Buckingham Palace, to hearing Big Ben strike the hours, to visiting the Tower of London with its crown jewels.

The Harry Potter books and movies have entranced children (and adults) around the world, and Warner Brothers studios offers a tour of the making of the movies with their amazing stage sets, costumes, creatures, and wizardry. Fans of the movies will be captivated by the intricate original sets such as the Great Hall, the Hogwarts Express, Dumbledore’s office, the Forbidden Forest, and Diagon Alley. There’s also an area devoted to the ingenious props and elaborate costumes used in the films, including art and models created for them. Visitors can also learn about the movies’ spellbinding special effects. London has provided a stunning backdrop to many popular films and TV series, including children’s favourites such as Harry Potter, Mary Poppins and Paddington Bear and TV series such as Sherlock and Mr. Bean. A kid’s Movie Tour of London provides a fun experience for children to see the locations where some of their favorite films were shot. The bus tour travels to some of the most memorable film locations around the city, including Platform 9 ¾ at Kings Cross Station from Harry Potter fame! Guides share behind-the-scenes details about the films while the bus whisks visitors past some of London’s most well-known sights. Watch clips of movie scenes as the tour passes the actual filming locations.

If your child (or perhaps you are too) is a devoted fan of Chelsea FC, one of England’s premier soccer clubs, they will love the special tour of Chelsea’s Stamford Bridge stadium. They’ll get a behind-the-scenes look at the history and personalities from their team over the years. 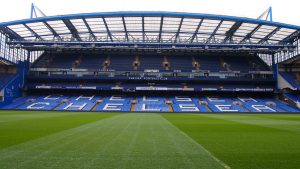 On the guided tour, your young sports fans will see the Chelsea dressing room where their heroes get ready for the match. Visit the press room and dugout where the manager watches the game. Jog down the players’ tunnel onto the pitch, and head up into the stands. Then you’ll visit the museum which presents the history of the club and its many trophies. Enjoy interactive exhibits and videos with information about its most famous stars over the years.

Originally built for the Millennium festivities in 2000, the London Eye has become the city’s most popular paid attraction. The wheel towers above the south bank of the River Thames, and a ride here will provide families with a glorious bird’s eye view over central London. 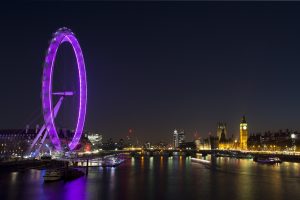 Discover the sites of London from the London Eye

Your kids will love spotting such landmarks as Big Ben, St Paul’s Cathedral and the Tower of London as the wheel slowly completes its 30-minute revolution. There is also a short 4D movie on London that will give kids a quick city overview before they embark on their journey in one of the 32 glass capsules.

Beautiful Kew Gardens offers a spectacular collection of trees, plants, and flowers. A children’s garden provides delightful amusements for your kids. The whole family can enjoy the beautiful environment with its ornate greenhouses, ornamental lakes, and the wonderful variety of flora in its many garden areas.

The glass house at Kew Gardens

Children have their own special garden, with the themed areas of Water, Earth, Sun, and Air, all based on what elements flowers need to grow. Kids can enjoy the outdoors and have their imaginations stimulated. They can play in sand pits, climb through colourful tubes and tunnels, pump water in a basin, bounce on trampolines or walk the winding paths while admiring the swaying sunflowers. 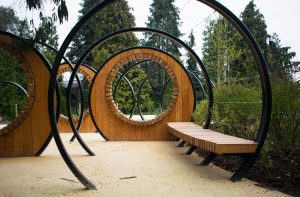 A dedicated children’s garden can be found at Kew Gardens

Afternoon tea has long been an established London tradition, offered at many of the city’s finest hotels and restaurants. Kids can get in on the fun on an afternoon tea bus tour during which they’ll enjoy some delicious cakes and sandwiches with their tea, while driving through the heart of the city passed its most iconic sights like Westminster Abbey, Trafalgar Square and Buckingham Palace. You’ll ride in style in one of London’s vintage red double-decker buses. Delicious and fun – an afternoon tea bus tour in London

One of London’s icons is the fleet of black cabs that transport visitors around the city in comfort. A unique and fun way for older kids to get to see many of the top sights in the city and get some great pictures is to take a photography tour with a black cab driver as your guide.
Enjoy professional photoshoots with the great sights of London as a backdrop. A fun family activity that will leave you with lasting memories and a collection of wonderful photos to remember your trip by. 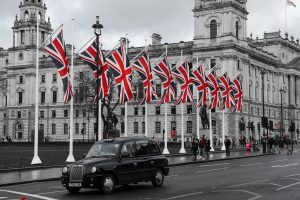 London has a dynamic arts scene, and older kids will appreciate the diverse collection of street art by some of the most famous street artists in the world like Banksy. A great way to see these street art creations is by bike. 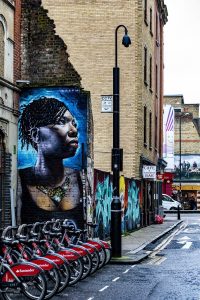 On a small group bike tour led by a resident street art expert, you’ll visit some of the finest London street art around East End areas such as Brick Lane, Hackney and Shoreditch. Learn about the creative thought processes behind these imaginative works of art in a variety of mediums, from murals to sculptures. Banksy’s infamous murals are not to be missed

Let us help us design your perfect family outing to London! We offer a 5-day London City Break Itinerary that provides a great introduction to the city and covers its main highlights.