Home / Blog / Italy / Sicily: The 5 minute history lesson that will leave you speechless

Sicily: The 5 minute history lesson that will leave you speechless

The Island of Sicily is one of the most significant crossroads of history.  Its strategic location in the Mediterranean Sea between Europe, Asia and Africa, as well as its incredible fertile land, made it one of the most fought over locations in the world.  From as early as the 11BC the island and its inhabitants have been conquered constantly. Here is a quick 5 minute history lesson if Sicily that will leave you speechless.

Every major civilisation of the ancient world has left their mark on the tiny island. The lasting effect is an incredible mixture of ancient sites, culture, and cuisine.

It is this mixing pot of history that makes Sicily one of the most incredible places to visit.  While the history is vast and intricate, here we have detailed the biggest moments in Sicily’s history. Read on for a 5-minute history lesson that will be sure to put Sicily on your bucket list.

All the major players in the ancient world have called Sicily home including the Phoenicians (Modern day Lebanon), the Greeks, Carthaginians, Romans, and Arabs.

Sicily is home to the best-preserved Greek temples outside of Greece.  After suffering from a mega-drought that land locked parts of Greece and decimated the climate for hundreds of years, the inhabitants had no choice but to look for new land.  They set sail and settled on the East coast of the Sicilian Island. Here they created some of the world’s most impressive Doric temples – many of which still stand today.  Syracuse thrived. It rivalled Athens as the most populous Greek city in the world.  Their grandeur is still very present today as you walk amongst the streets and temples in Ortigia.

Such splendour did not go unnoticed by the Romans.  By 200BC, they wanted Sicily for themselves. For this they would need a new and innovative way to fight the mighty Carthaginians. 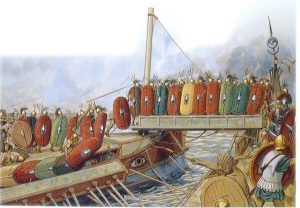 They invented a corvus  (a long boarding bridge they attached with a giant claw to the Carthaginian ships allowing them to board and fight hand to hand). It became the strength of the Roman army. But it didn’t end well.  Turns out that being stuck to another ship amidst rough seas is not ideal. The device actually lead to many Roman ships sinking.  It was thus abandoned not long after these battles, but indeed was the reason they were able to take the island (except for Syracuse, which fell later after a 2-year siege).

The Romans used Sicily as a holiday destination and built impressive villas (most notably Villa Romana del Casale).  The rich and famous Romans including Emperor Hadrian and Marcus Aurelius spent much time relaxing on the island.

After the fall of the Rome Empire, the Vandals ravaged the island until the 535AD. The Emperor Justinian of the Byzantine Empire decided to move their capital from Carthage to Syracuse.

But one of the biggest influences on the island came next, the Arabs.  For over 50 years they tried to take the island only succeeding in 827AD.  Palermo, the capital, became one of the most important towns of the Islamic world, second only to Baghdad. It was legendary for its luxurious gardens and buildings.

Norman Sicily: How King Roger II created an enlightened Sicily while the rest of Europe fell into the Dark Ages.

After 200 years of Arab rule, King Roger II, a member of the Norman de Hauteville dynasty was crowned the first King of Sicily.  Roger ruled from Palermo and created one of the most multicultural cities of all time.  Young Roger was a student of all cultures and was formally educated by Greek and Arab tutors.  His court was diverse and welcomed people from all over the world. It was not uncommon to hear Italian, Norman French, Greek and Arabic languages spoken. During his reign Sicily flourished; the revenue from Palermo alone exceeded that from the Normans’ entire Kingdom of England.

Under Roger II, the Kingdom of Sicily was characterised by its multi-ethnic nature and religious tolerance. Byzantine Greeks, native Jews, Muslim Arabs, Normans, Longobards and “native” Sicilian peoples lived in harmony. Freedom of worship was preserved, with mosques, synagogues, Byzantine (Orthodox) churches and Latin (Roman Catholic) cathedrals existing side-by-side. Personal rights were respected, and the legal code permitted the accused to be tried according to the laws of their own ethnic culture. The ultimate sign of his views on religious freedom was when Roger II refused to join the crusades against the Muslims taking a firm stand against the Roman Catholic church. 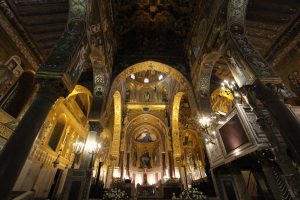 The “Norman-Arab” style of art and architecture flourished. It is best seen at the Palatine Chapel (Roger’s private chapel) in Palermo1.  The reign of King Roger II was indeed Sicily’s Golden Age and one that is still very present when visiting Sicily today.  You’ll find Arab influences in the cuisine, churches and temples that display both Byzantine and Islamic insignia. 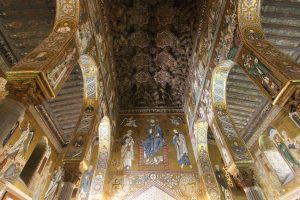 We can still see King Roger’s influence today. The Opera Król Roger, composed by Karol Szymanowski, was inspired by the composers travels to Sicily. The play depicts Roger’s spiritual and philosophical journey.  The play recently had an acclaimed re-imagination with sold out shows in London and Sydney.

The Struggle for Independence – How Sicilians never stopped flighting to protect their rights.

In the 1800’s, Sicily was ruled by the Bourbons of Naples. By the time Victor Emmanuel started his unification of Italy in 1860, Sicily had already been struggling for independence.  The idea of succeeding from Naples and joining a free independent Italy appealed to Sicilians, but they were not able to act alone. It was Giuseppi Garibaldi who cobbled together an army and marched on Southern Italy. He successfully overthrew the Bourbon monarchy and thus brought Sicily into the arms of a unified Italy.

The years after the unification brought great cultural enlightenment back to Sicily. Many Noble Prized winning playwrights, authors and philosophers emerged.  However, economically the island struggled with mass emigration to the US and other regions.  The promise of social equality was not a reality under Emmanuel. The Sicilian middle class slid backwards. They found themselves unable to assume any leadership role in Sicilian society resulting in continued unrest.

After WW1, the fascist regime took control. Sicilians found their identity being further eroded by strict rules encompassing dress, language (Sicilian language has survived and can still be heard throughout the region), and behaviours.  There is historical evidence of torture by police officers and postal censorship.  This continued until liberation by the allies in 1945. Sicily was then granted a large measure of autonomy in 1946 allowing for a regional parliament that is still in place today.

As early as 1876, Italian politicians Franchetti and Sonnino documented the reigning presence of the Mafia in Sicily. At the time, the Mafia was hired to help wealthy landowners enforce repressive systems of social order. However, as time went on, they became a force of their own.

After a severe economic collapse in the early 1900s, the Mafia began to corrupt the political system. By the 1980s, things had reached breaking point. Bodies were being found daily in the streets of Palermo. The mafia family, known as Cosa Nostra, held a number of high profile assassinations against politicians.

For more information on the Sicilian Mafia read here.

Two major events finally changed public opinion. The bombing of Sicilian judge and anti-mafia campaigner Giovanni Falcone, followed closely by the murder judge, Paolo Borsellino. These brutal murders helped to turn many in Sicily against the mafia and sparked change in the region. The two men, who worked closely together, have become national heroes to the country’s ongoing attempts to rid itself of the grip of organised crime.

Continuing the fight today is Nino Di Matteo. The public prosecutor is considered the most endangered man in Italy.

Although the days when blood-soaked bodies lay in the streets of Palermo are gone, the fight against the Mafia is far from won. The Sicilian Cosa Nostra is merely pursuing a different strategy. Instead of fighting the government with weapons, they are infiltrating it. As it invests money in the legitimate economy, it makes greater inroads into society.

Small local business are frightened into paying ‘protection’ costs to the mafia. While one of the biggest challenges of tax evasion continues to take its toll on the Italian government.

There is a reason Sicily remains one of Ormina Tours most popular destinations in Italy.  With sites like The Valley of the Temples and Villa Romana del Casale, Sicily offers a glimpse into history not often seen. 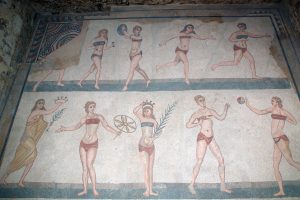 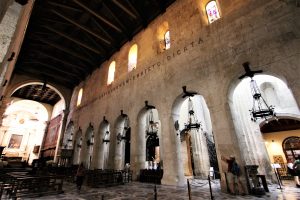 “What makes Sicily so special is that you literally can see the crossroads of history.  From the Norman Palace with its Islamic text next to Byzantine mosaics to the Cathedral in Ortigia, a 2,500-year-old Greek Temple turned into a Baroque masterpiece.  The simplicity of the Greek columns supporting the temple are juxtaposed to the ornate Baroque façade.  It’s really awe-inspiring” Says Ormina Tours’ Anna Jones.  “Sicily is my favourite place to visit in Italy, the diversity of the Island offers so much to explore.  The monuments are incredibly well preserved and much less crowded than more well-known Greek or Roman sites.  I had a magical moment standing inside the Greek Temple at Selinunte.  I was the only one there, how often do you get a chance to be alone with a temple, it was a really enchanting moment.”

If you don’t already have it on there, add Sicily to your bucket list! Join our Sicily Bella tour for a luxury experience of the island, including all the best sites and experiences. lick here for the full itinerary.

University of Georgia ‘Outline of the History of Sicily’; 1Best of Sicily; 2Sicily. How an Italian island became ungovernable