A Quick History of Malta Malta is a small country of three inhabited islands, Malta, Gozo and Comino, located in the Mediterranean Sea between Sicily and Tunisia.

Malta has a rich past, with its earliest beginnings going back to Neolithic farmers from Sicily around 5000 BC, followed by temple building peoples some 1500 years later. Some of the ancient structures they created pre-date even the Pyramids of Egypt. Given its strategic position, Malta was colonised by the sea-going Phoenicians and then ruled by their principal colony, Carthage. The island’s name derives from a Phoenician word for ‘shelter’ or ‘haven’. 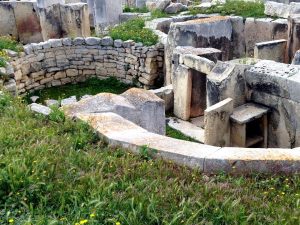 After Rome’s victory in the Punic wars, Roman rule was established over Malta. St. Paul, the Apostle, was shipwrecked on Malta in 60 CE, and converted the inhabitants to Christianity. Malta fell within the jurisdiction of the province of Sicily.
Byzantine and Arab Control
After the fall of the Roman empire in 395 AD, control of Malta was taken over by the eastern rulers of the empire based in Constantinople.
Malta was invaded by the Arabs in 870. Over the course of over 200 years, the Arabs influenced the development of the Maltese language. In addition, they introduced new irrigation techniques as well as certain fruits like figs, along with almonds, spices, and cotton to the island.

The streets of Mdina

The Normans and the Spanish

In 1091, the Normans conquered Sicily, and Malta became part of the Kingdom of Sicily. As a result of the Norman takeover, Catholicism again became the country’s religion.
Over the ensuing centuries Malta passed under the control of several European feudal dynasties, lastly the Spanish for over 200 years. Ultimately the Spanish King Charles V gave the island to the Knights of St John for the protection of Catholic Europe against the continuing threat from the Ottoman Empire.

The Knights of Malta

Who were the Knights? In 1048, some Italian merchants founded an order of monks called the Order of St. John of Jerusalem to care for sick travellers who had gone on spiritual pilgrimages to Jerusalem.
Christians were also fighting the Crusades against the Muslims at that time. The Order of St John took on a military aspect as they began to fight Muslims in addition to caring for sick pilgrims, and so became known as the Knights of St John.
The Muslims drove the Christians out of the Holy Land in 1291, and Knights of St John moved their base of operations first to Cyprus and then in 1310 to Rhodes. However, the Turks captured Rhodes in 1523 and the Knights were left without a home.
In 1530, the Spanish King Charles V ceded Malta to the homeless Order of the Knights of Rhodes. He granted the Knights a perpetual lease on the island for which they had to pay a yearly tribute of one Maltese Falcon.
Malta built up its fortifications under the Knights’ grand master Jean de Valette, and subsequently withstood the Ottoman siege of 1565. The next year the new capital city of Valletta was founded, and it became a showplace of beautiful architecture and splendid palaces as well as strong defensive fortifications. 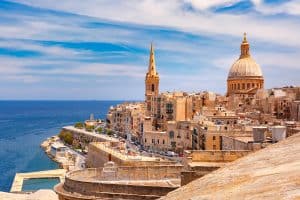 View from above of roofs and church of Our Lady of Mount Carmel and St. Paul’s Anglican Pro-Cathedral, Valletta, Capital city of Malta

The Knights of Malta ruled the country from 1530 until 1798. Their 250-year rule left a dramatic historical imprint on the country. From its symbolic white eight-pointed cross to the rich architectural heritage and artworks produced during their rule, the Knights endowed Malta with an extraordinary cultural wealth. In keeping with their original mission, they also made Malta medically renowned by building the Sacra Infermeria in 1574, Europe’s foremost hospital at the time.

Discover Valletta, Malta’s capital built by the Knights of the Order of St. John, on our 7-Day Malta Itinerary

In 1798 French army officer Napoleon Bonaparte, en route to his expedition in Egypt, captured the island. The Maltese rebelled against the French and called for assistance from Britain to free them from French control. Although the French were unpopular, they did abolish slavery and eliminated the dreaded Inquisition.

By the middle of 1800 British troops had arrived. The French held out in Valletta for three months before they surrendered.

The British Throne took over Malta after the French defeat. In the 1814 Treaty of Paris, the other European powers recognised Malta as a British colony.

Malta was subsequently part of the British empire for 150 years. English became an official joint language with Maltese for the country.
During World War II, Malta suffered extreme bombing and hardship. Impressed by the bravery of the Maltese people, British King George V awarded the entire island his George Cross in 1942. This award remains part of the national flag.
Independence and European Integration
Malta became an independent nation in 1964, ending the long period of British rule. Malta’s striking historical heritage and architecture gained it recognition in 1980 as a UNESCO World Heritage site, honouring the city of Valletta, the country’s Megalithic Temples and the Hal Saflieni Hypogeum. Malta joined the European Union in 2004 and adopted the euro as its currency in 2008.

Discover Malta’s history for yourself on our 7-Day Itinerary – see the full itinerary here. 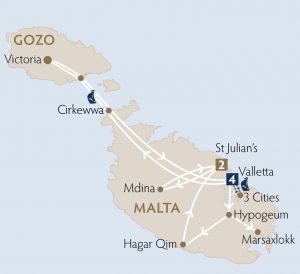 Our 7-Day Itinerary of Malta