8 Secrets of Pompeii and Herculaneum Pompeii and Herculaneum are ancient Roman cities located in the Campania region near Naples in southern Italy. They are famous for having been destroyed by the volcanic eruption of Mt. Vesuvius in AD 79. They were subsequently rediscovered in the late 1600s. Both cities provide a snapshot of everyday life in Roman towns – frozen in time by their burial. Their excavations in the mid 1800s marked the start of modern archaeology.

Why are Pompeii and Herculaneum so significant?

The commercial city of Pompeii is the larger and better known of the two sites. This city was home to 10,000-20,000 people (compared to 4,000-5,000 at the seaside resort of Herculaneum). Both provide invaluable information about life in a Roman city of the era. Including, how its residents lived and died, its politics, food, and daily activities. The excavations and ruins spurred an increased interest in the classical world. And the sites became popular stops on the European Grand Tour.

How did it unfold?

Pompeii was the first to be destroyed in the volcanic eruption. This was because it was lying to the southeast of Vesuvius where the directive force of the winds blew. Herculaneum lay to the volcano’s west. It was hit by volcanic flows later. The destructive forces rained over the area for a total of three days. 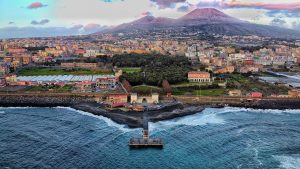 View of Mt Vesuvius over Naples

How did the eruption preserve these cities?

The nature of the volcanic forces varied between the two locations. Pompeii was slowly submerged under a blanket of ash and pumice. While Herculaneum was consumed by a fiery volcanic flow of molten rock. Upon cooling, the lava had buried the town 50-60 feet deep, making excavations much more difficult. However, this preserved its ruins much more than those of Pompeii.

The historical importance of these two locations was recognised when they were named as UNESCO World Heritage Sights in 1997. Here are some intriguing facts about Pompeii and Herculaneum!

Visiting these sites provides a rare glimpse into the past of ancient Rome. You can discover how the citizens of the two of its cities lived, worked, and ultimately met their fate. Join us in exploring the ruins of Pompeii as part of our 7-Day Highlights of Italy South Small Group Journey!