8 of the best UNESCO cultural sites across Spain Spain is a large and diverse country with numerous man-made and natural wonders. Spain ranks third in the world with 49 UNESCO World Heritage Sites. These are landmarks designated by the United Nations Educational, Scientific and Cultural Organisation as having special historical, cultural, natural, or scientific interest.
In addition to naming sites in the largest cities of Madrid and Barcelona, UNESCO has also chosen many locations in the beautiful southern region of Andalusia.

Here are 8 of the best UNESCO cultural sites across Spain you should have on your itinerary.

Granada is an evocative Andalusian city set against the snowcapped Sierra Nevadas. As the last stronghold of the Moors in Andalusia, Granada features the fabulous 13th century Alhambra. It is an ornate Moorish Palace, and subsequent Christian cathedral, that dazzles visitors with its fabulous architecture and delightful Generalife Gardens. 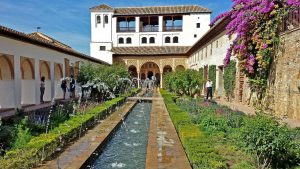 The city provides atmospheric alleys to explore in the old Muslim Albaicín quarter. A truly outstanding example of a medieval Moorish town plan.

2. Cathedral, Alcázar and Archive of the Indies, Seville

Seville lies on the banks of the Guadalquivir River. It boasts a fantastic historical core that displays its rich Moorish architectural heritage. The outstanding structures include its magnificent Cathedral with the striking La Giralda Tower, the Alcázar Palace and Torre del Oro watchtower. 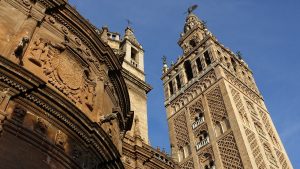 The Cathedral in Seville

The Cathedral and the Alcázar are remarkable historical buildings. They show the joint influences of Moorish and Christian rulers over the city’s development. The Cathedral’s tower used to be a Moorish minaret and the Cathedral itself houses the tomb of the famed explorer Christopher Columbus.

The Alcázar in Sevillie, Spain

The Alcázar was the Palace of the Muslim governor. The Archives of the Indies is a treasure trove of historical records documenting the era when Spain governed colonies in the Americas.

3. The Historic Centre of Córdoba

Córdoba is one of Andalusia’s gems that displays its multicultural history. Architectural treasures like La Mezquita, a former 10th century Moorish Mosque converted into a 16th century Cathedral are the perfect example. The Old Town’s narrow winding streets are charming to explore, as is the Jewish quarter with its 14th century synagogue. History abounds with the Palace of the Christian Kings, Moorish bridge and Calahorra Fortress. 4. The Historic City of Toledo

Toledo is a scenic, artistic jewel with outstanding historical attractions. Start with the city’s awesome setting, perched atop a gorge over the Tagus River. Toledo was known as the city of three cultures where Muslim, Jewish and Christians could peacefully coexist. The city core contains mosques, a Gothic Cathedral, and synagogues. The most imposing sight is the Alcazar fortress on top of the highest hill.
The artist El Greco lived in Toledo. Be sure to visit his work that can be seen at the El Greco Museum, the Church of Santo Tomé, and the Santa Cruz Museum among others. 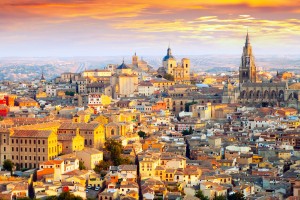 The city of Toledo, Spain

One of the chief glories of the city of Barcelona are the magnificent architectural creations of Antoni Gaudí from the late 19th and early 20th centuries. This Catalan was behind such beautiful achievements as the still unfinished cathedral of La Sagrada Familia, apartment buildings like the art nouveau Casa Milà, and mosaic-tiled Casa Batlló.

He also designed the whimsical Parc Güell and houses from the earliest days of his career for individual owners such as the Casa Vicens and Palau Güell. 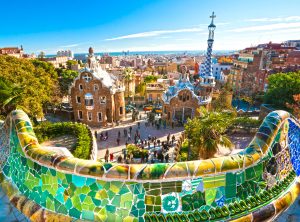 Barcelona is renowned for its striking modernist architecture, even beyond the creations of Gaudí. Take in a performance at the stunning Palace for Catalan Music. Admire the buildings of the Hospital de Sant Pau. Both were built by the Catalan art nouveau artist, Lluís Domènech i Montaner.
The Palace of Catalan Music is an art nouveau masterpiece that opened in 1908. Inside and out, the building is a magnificent work of art. 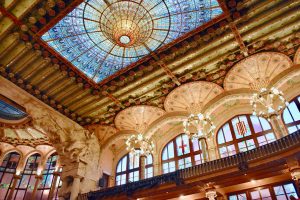 The Palace of Catalan Music has stunning details

Originally constructed as a hospital, Sant Pau is an amazing collection of buildings built by Montaner to meet the needs of the patients of a large city hospital. Today it is a cultural centre. The chief interest for visitors is the lavish decoration of its pavilions with beautiful tilework, stained glass, domes, and ornate staircases. 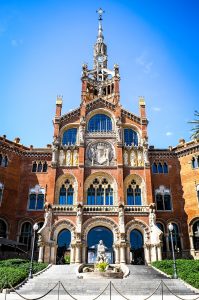 7. Paseo del Prado and Buen Retiro, a landscape of Arts and Sciences, Madrid

Madrid is not only Spain’s capital city but a dynamic modern city. It is full of world-class museums, historical monuments, and lively squares. UNESCO has recognised the Paseo del Prado and the Buen Retiro Park as a crowning cultural achievement in a unified landscape of arts and sciences. The Paseo del Prado is a beautiful tree-laned avenue that passes several of the best art collections in the world. These include the magnificent Prado Museum, the Reina Sofia Arts Center, and the Thyssen-Bornemisza Museum. The avenue continues past major fountains and buildings dedicated to the sciences as well as industry and healthcare. El Buen Retiro Park was originally built for the exclusive use of the Spanish monarchy. In 1868 it was opened to the public and can now be enjoyed by all.

Set within a landscape of olive trees, Úbeda contains some of the most artistic and stately architecture in all of Andalusia. A walk through its historic heart, or along its walls, reveals a wealth of inspiring palaces and churches. Primary sites of note include the Hospital de Santiago and the beautiful chapel in the Plaza Vázquez de Molina.

Just a short distance away from Úbeda, the town of Baeza is also known for its 16th century Renaissance architecture. The atmospheric squares including the Plaza Mayor, Plaza Santa Maria, Plaza del Pópulo and Plaza de Espana, feature such highlights as the Fountain of the Lions, Baeza’s cathedral, the Jabalquinto Palace, Town Hall and Old University buildings.

To sample some of the best UNESCO World Heritage Sites in the country, consider our 10-day Best of Spain Small Group Journey, our 6-day Southern Spain Regional Discovery itinerary or our 5-day Barcelona City Break itinerary. We can help create the perfect itinerary crafted to suit your travel style, destinations, and interests. Get in contact with us today for a free quote!