A trip to Northern Spain wouldn’t be complete without a visit to the renowned Guggenheim Musem Bilbao.

This contemporary art museum represents a magnificent example of innovative 20th-Century architecture. Be sure to stop by for a visit, even just to walk around the building’s exterior. Our Northern Spain Regional Discovery includes entry and a guided tour of the museum – read more here.

How did it come about?

In 1991 the Basque government of Spain appointed the Solomon R. Guggenheim Foundation to build a museum at Bilbao’s decrepit port area. It was the Foundation that selected the Canadian-American, Frank Gehry, as the architect for the project. 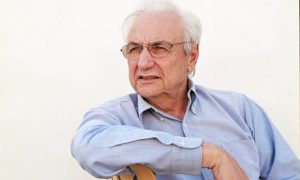 Frank Gehry is considered one of the most relevant and influential architects in the world. He is internationally renowned for his unique designs that incorporate new shapes and materials, while taking careful consideration towards the buildings’ surroundings.

Gehry has received the most prestigious architecture prizes, such as the Pritzker, which he was awarded in 1989 or the Praemium Imperiale Award in 1992.

What makes it so special?

When the Guggenheim Museum Bilbao opened to the public in 1997, it was immediately hailed as one of the world’s most spectacular buildings, and to this day is still one of Gehry’s most celebrated works.

Surrounded by attractive avenues and squares, the Museum is located in a newly developed area of the city, reinventing its industrial past. 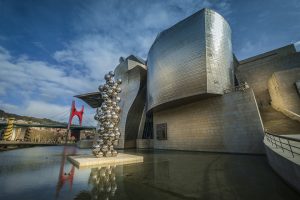 The exterior of the Guggenheim Museum, with artwork ‘Tall Tree & The Eye’

You can walk all the way around the Museum, admiring different configurations from each perspective as well as a number of artworks installed outside by artists such as Louise Bourgeois, Eduardo Chillida, Yves Klein, Jeff Koons, or Fujiko Nakaya.

The internal space is just as spectacular, with the real heart of the museum – the Atrium – connecting the three levels of the building with large glass curtain walls that play on different volumes and perspectives. 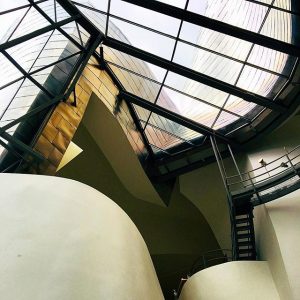 The museum is now recognised as one of Gehry’s most celebrated works. Gehry’s design creates a spectacular sculpture-like structure, perfectly integrated within Bilbao’s urban pattern and its surrounding area.

This spectacular piece of architecture is one not to be missed and is included as part of our Northern Spain Regional Discovery itinerary. Click here to find out more and be inspired for your next holiday to Spain!

Information and images from: https://www.guggenheim-bilbao.eus/en