Puglia’s Salento Peninsula shares the coast of both the Adriatic and Ionian Sea, making it well-known for its spectacular beaches, grottos and coastlines – ready for you to discover. There are a number of beautiful towns and cities spotted along the coast that are worth visiting if you have the time. Here are some of our recommendations:

As the largest city in southern Puglia, this town is the gateway to the Salento Peninsula and perhaps a great central location to stay if you are planning on making a few day trips. The city is known for its spectacular Baroque architecture and Roman history. A quintessentially southern Italian town, bursting with piazzas and palazzi, it will remind you of Florence. Read more about Lecce here. 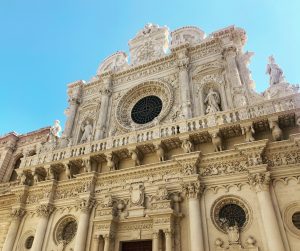 Lecce, the gateway to the Salento Peninsula

On the lower east coast of the peninsula is the delightful white-washed town of Otranto. It’s a great place to grab something to eat at a restaurant overlooking the water, or even just to enjoy a gelato and relax on the beach with crystal blue water. For a fantastic view, head up to the Aragonese castle. Our Enchanted Puglia tour will take you here for some leisure time to explore.

While you’re there, the Old Town is also a pleasure to walk around with its partially enclosed medieval walls. Make sure to head to the 11th Century Cathedral with beautiful mosaic floors as well as the Chapel, which is decorated with the remains and skulls of 800 martyrs that were killed in the Turkish invasion of 1480. 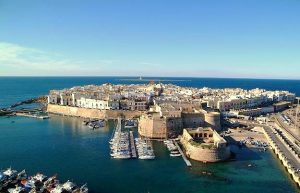 Said to be founded by the Greeks, the name Castro actually comes from the Romans who built the city up in 120BC as ‘Castrum Minervase’ or ‘Minerva’s Castle’.  The castle and walls that remain today date to the 16th Century and it was during restoration works that they found a temple dedicated to the goddess. The delightful Old Town hosts a number of interesting historical sites with amazing sea views over limestone cliffs, while maintaining its tradition as a fishing village.

If you enjoy scuba diving or snorkelling and want to explore some caves around the coast, this is a great place to stop. The biggest of the caves is the Grotta Zinzulusa, which is decorated with stalactites, stalagmites, and even an internal lake. 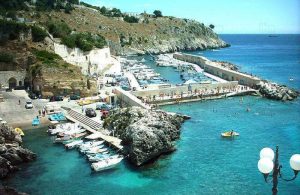 The southernmost point of Puglia – where the Adriatic and Ionian seas meet, is the town of Santa Maria di Leuca.  The town itself boasts a mixture of architecture in both Moorish and Art Noveau styles, with a great seaside promenade of cafes and restaurants that comes to life at night too.

While the beaches are not so great here (instead head to the sandy beaches at nearby Felloniche, Posto Vecchio, Torre Vado and Pescoluse), it presents the perfect opportunity to go out on a boat trip to enjoy a swim in the spectacular emerald sea, and discover nearby underwater caves and over 30 Karstic grottos. Enjoy a boat ride here on our Enchanted Puglia tour. 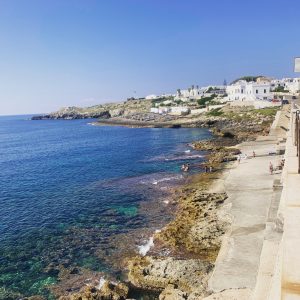 On the west coast many travellers like to head to Gallipoli, which was originally built on a limestone island – the Old Town connecting to the mainland by a bridge in the 16th Century. The town has a picturesque historic centre characterised by its maze of alleys, and in the middle the 17th Century Baroque Sant’ Agata Cathedral. Here you will also enjoy the local seafood and there is a nice white sand beach outside the towns walls.