Home / Blog / Archaeological Sites / 5 Reasons Why You Should Visit Portugal

5 Reasons Why You Should Visit Portugal Portugal is a delightful destination for discerning travellers who want a diverse, exciting European experience without the crowds of other popular locations. It packs a large punch for a small country. From the cultural appeal of the cities to the charm of its small, picturesque villages and the culinary draw of its top restaurants and wine regions.

The Cities: Lisbon and Porto

Lisbon is full of history and scenery, having been built atop a series of hills. It’s the old of the Alfama district of winding streets and picturesque squares and St. George’s Castle and the new of the nightclub scene in Bairro Alto district. It’s the history of Portugal’s seafaring past coming alive at the Monument of the Discoveries and the Tower of Belem. 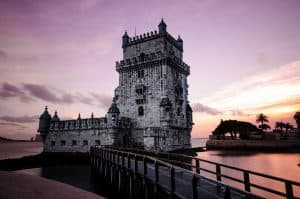 What else is special? Climb aboard one of the city’s vintage trams, explore its narrow lanes and seek out al fresco coffee bars. It’s the artistic traditions, from the Manueline architecture of the Jeronimos Monastery echoing the maritime past of the country to the fabulous craftsmanship of azulejo tiles adorning miradouros and churches to the soulful sounds of Fado from local nightclubs. 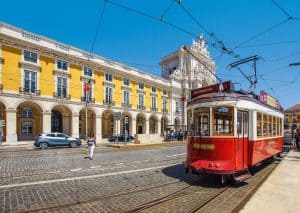 Porto offers its own tempting array of pleasures as Portugal’s second largest city. Wander the medieval winding streets past 14th century walls, explore the shops and restaurants of Rua das Flores and the Ribeira riverside quarter overlooking the Douro River. Admire the tiled houses along the river, take a trip on a Rabelo, a traditional Douro River boat, and enjoy port wine tastings.

The countryside beckons with palaces, medieval towns such as Marvao and Sortelha and seaside villages like Cascais waiting to be explored. Seek out the UNESCO world heritage sites of Evora and Guimarães with its 10th century castle. Take a day trip from Lisbon to sample the cluster of royal hilltop residences in Sintra such as the exotic Moorish-looking Pena Palace. Get a better taste of Sintra’s palaces by reading this article.

Other noteworthy towns to seek out include:

Aveiro, Portugal’s Venice, set along a lagoon with colorful boats and art nouveau buildings. Enjoy a ride on the moliceiros, gondola like boats that ply the canals and dine at Salpoente,
a Michelin star restaurant.

Obidos, an ancient, fortified town with a medieval castle. Ramble the cobbled streets and take in the medieval market.

Coimbra, a historic university city set along the banks of the Mondego River, and the former capital of Portugal.

Portugal’s relationship to the sea tells in its fine cuisine, from bacalao to sardines to the abundance of offerings at Lisbon’s Time Out market. And don’t miss the custard tarts—pasteis de Belem, perhaps from the very store that first started making them in Belem in 1837.

Wine connoisseurs will flock to the Douro Valley for wine tastings, river cruises and train journeys, and to Porto for the lodges offering fine Port wine. 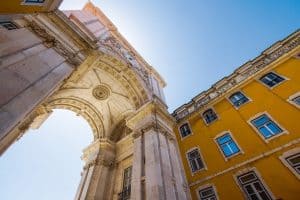 Historic structures have been turned into pousadas, wonderful places to stay in both the countryside such as at Obidos Castle and the Palacio de Estoi, and in the cities, such as at the Pousada de Lisboa on Praça do Comércio in the heart of Lisbon.

Portugal offerings magnificent beaches along its southern coastline in the Algarve. There are even Roman ruins to be explored in Estoi, close to Faro. Small fishing villages provide peaceful retreats, and spectacular rock cliffs and formations call for exploration all the way to Cabo San Vincent. This is the most westerly part of Europe, near where Prince Henry founded his navigation school at Sagres and Portugal vied with Spain as the top maritime powers in the world.

Relax and unwind at Tavira Island or go snorkeling and explore rock pools and caves at Praia da Marinha, one of the top 100 beaches in the world. There are beach discoveries closer to Lisbon and Porto as well. 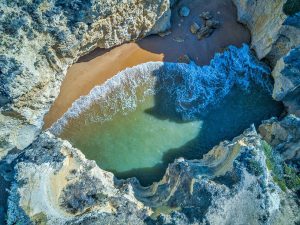 Portugal also offers far-flung islands to be explored, including the nine islands of the Azores set in the mid-Atlantic and the main island of São Miguel. Here is where nature tourism reigns supreme, from visiting extinct volcanoes to viewing waterfalls and tackling hiking trails.

Natural beauty is also on full display on the mountainous island of Madeira off the northwest coast of Africa and is also known for its namesake wine.

Portugal’s historic roots are a delight to explore both in its cities and countryside, from regal castles and wine estates to walled villages. Its restaurants and vineyards provide the source of wonderful meals and drink to satisfy the most discerning palates.

Overnighting in a historic pousada will take you back in time while still providing the highest level of gracious service. Fancy a week enjoying the best that this small but dynamic country has to offer? Check out this Best of Portugal six-day itinerary and start dreaming of your escape….