Home / Blog / Italy / 3 Must Do Experiences in the Aeolian Islands

3 Must Do Experiences in the Aeolian Islands 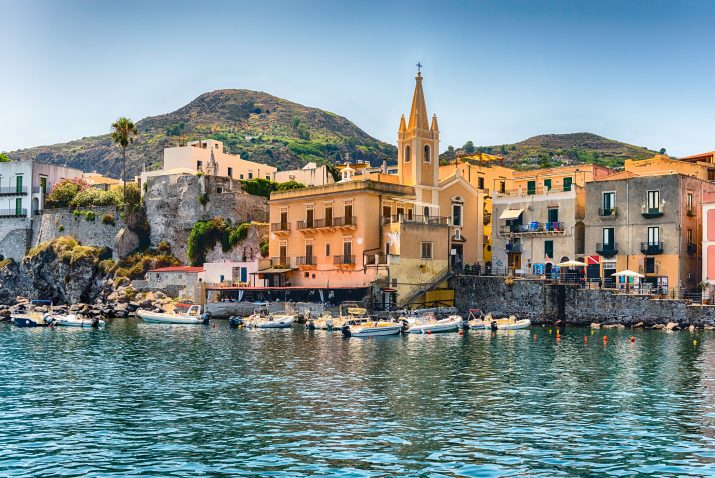 A delightful add-on to any Sicily itinerary is a trip to the Aeolian Islands. Situated off the northern coast, formed by volcanic action. Made up of seven islands, each differing greatly in their characteristics and things to see and do. The Aeolian Islands can be an exciting diversion from traditional Sicilian tours.

The Aeolian Islands’ offer many must do experiences because of their diversity. From the rumbling volcano of Stromboli to the geothermal baths of Vulcano, the jet set scene of Panerea to the green island of Salina with its caper growing industry, vineyards, and beautiful beach at Pollara, and the busy main port and village of Lipari.

The rocky coastline of Lipari

The Aeolian Islands were awarded UNESCO World Heritage Site status and are named for the Greek God of Wind, Aeolus. They provide fascinating destinations for in-the-know travellers. Join our 5-day Aeolian Island Regional Discovery to get a taste of these beautiful destinations set in the Tyrrhenian Sea!

Here are 3 must do experiences when visiting the Aeolian Islands:

Lipari is the largest of the Aeolian islands. Its namesake town of Lipari offers visitors a charming Old Town to stroll through along the lively main street of Corso Vittorio Emanuele. The commanding 16th century Castle atop was once a Greek acropolis. Within the castle’s protective walls are several churches and an archaeological museum rich in collections. Here you can discover ancient Greek theatrical masks, vases and treasures recovered from ancient shipwrecks. 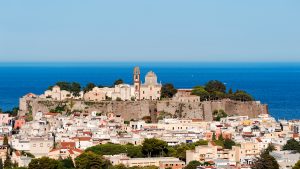 The volcanic soil of Lipari allows for the growing of grapes. A great island tour is a visit to the winery of Tenuta di Castellaro on the west side of the island. Here you will learn about the wine making process, visit the cellars and vineyards and cap it all off with a tasting of several of the local wines with lunch. Be sure to try the Malvasia dessert wine made from raisins! Another scenic stop on the island include Marina Corta – a charming small harbour full of small fishing boats. The Quattrocchi (Four Eyes) Belvedere offers memorable panoramas over the Lipari coast. Enjoy the sea cliffs and views of volcanic smoke arising from neighbouring Vulcano.

Combine a visit of extremes with a day’s outing to the islands of Panarea and Stromboli. Panarea offers spectacular scenery and beautiful coastlines. It has long attracted the rich and famous of Italian society during the summer months. From here you can see the island of Stromboli with its volcanic plumes of smoke. Stromboli is justly famous for its volcano, which you can climb as part of a guided hike, conditions permitting, to get closer to the active crater. From the sea you can sometimes watch lava flows heading down to the water in the so-called Sciara del Fuoco (stream of fire).

Views from the island of Panarea

The views of Panarea from the water are sublime. The island forms its own mini archipelago with a half dozen tiny satellite islands. It is the smallest of the seven inhabited Aeolian islands. Visitors land at the port of San Pietro. However, avoid visiting in summer if you want to avoid the throngs of wealthy Italians who come to party and enjoy the nightlife.

Otherwise, the town is a joy to explore. With its maze of streets, and colourful whitewashed buildings with blue doorways reminiscent of a Greek island and bright pink bougainvillea draping the walls. At the magnificent Cala Junca Bay, the promontory is topped by the stone ruins of Bronze Age huts. Go swimming or snorkelling near the small island of Lisca Bianca amongst steaming fumaroles emitting bubbles that rise to the sea’s surface.

Stromboli is renowned for its volcano, the most active in Europe. It has frequent eruptions, and offers black sand beaches. Your boat trip can also include a stop at the fishing village of Ginostra, clinging to the rocky cliffs and accessible only by boat. And you’ll want to have cameras ready for the Strombolicchio, a giant boulder topped by a lighthouse. 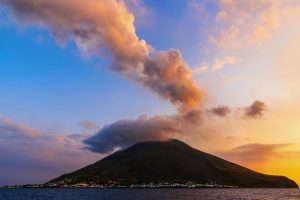 Salina is much greener than its Aeolian brethren and is the second largest in the chain. The island got is name from Roman times when salt was harvested here. Salina has two extinct volcanoes, Monte Fossa delle Felci and the slightly smaller Monte Porri. It is famous as one of the settings for the Italian film ‘Il Postino’, which made beautiful use of the stunning beach and seaside cliffs at Pollara.

Salina is more than gorgeous beaches. It grows many agricultural products, most famously capers, which adorn many local recipes. There’s even a caper festival here the first week of June. 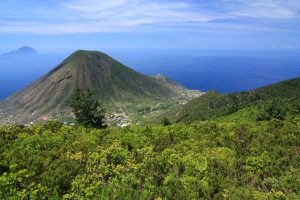 The green hills of Salina

A must-do Salina experience is a farm visit to see how and where the capers are grown and to sample them! The tour continues with a trip to the vineyards of a Salina winery, to see how the local vintners grow their grapes. Afterwards enjoy a light lunch there with local wine tasting, including the sweet local Malvasia wine.

There are many other worthwhile things to do on Salina. These include admiring the elegant 19th century merchants’ houses of Santa Marina Salina, the main port, and strolling the traffic free main street of the town. Fortunes were made by merchants in the 19th century selling Malvasia wine. However, they were then lost in 1890 when disease destroyed 90% of the vines. Mass emigration to Australia followed, and today the Museum of Emigration in Malfa tells the story.

The Aeolian Islands provide beautiful natural scenery and the dazzling spectacle of volcanic activity. There are wineries to visit, beaches and snorkelling amongst fumaroles on Panarea and boat rides to take in the spectacular coastlines, cliffs, and rock formations. Join us on our 5-day Aeolian Island Regional Discovery to experience the best of these beautiful isles!