We are incredibly proud to announce that our partnet hotel in Florence, the famed Brunelleschi Hotel, has just been awarded their second Michelin Star for their restaurant Santa Elisabetta.  This is an incredible honor for Chef Rocco De Santi who only one year eariler received his first Michelin Star. 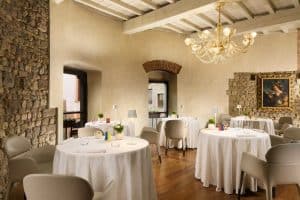 The refined synthesis of the Chef’s cuisine between Campania and Tuscany is enhanced by the restaurant’s unique location on the first floor of the Byzantine Pagliazza Tower, the intimate and exclusive atmosphere, the skilful and attentive service, all elements that contribute to creating a multisensory experience.

The award ceremony for the 2021 Michelin Guide was held on November 25 in Milan. Even in such a tough year for catering, the Michelin Guide has not ceased to award its prestigious stars. This edition naturally was held according with the health regulations required by the pandemic: only the winners were present in connection via skype and the ceremony was broadcast in online streaming. 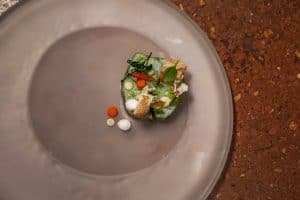 What strikes and wins over the customers of the Santa Elisabetta Restaurant is first and foremost the exceptional, historical and fascinating setting. Secondly, the Menu offers surprise and excitement, and is completed by a Wine List which is an ongoing research for the best. Last but not least, the discreet and attentive service is greatly appreciated. The Restaurant Team is perceived as an extension of the Chef in completing the dish, so much so that some dishes are finished off at the guest’s table.

“We are extremely proud to receive this double recognition, which rewards the efforts of the owners who have always believed and invested in the project of quality catering for the Brunelleschi Hotel and all our team. Above all, I thank our Guests, who have honored us with their preference over the years and are the key players in this prestigious path ”declared General Manager Claudio Catani.

Chef De Santis brought the Michelin star to the Santa Elisabetta Restaurant just a year ago, and with it a skilful synthesis between Tuscany and Campania. 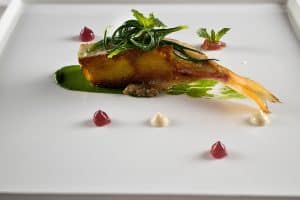 “I have a strong bond with my origins. Campania inspires me with emotion and ease: the sea, the mountain, places and people come together as ingredients of a recipe that lives up in my dishes. My masters have transmitted me a great respect for knowledge, which I place at the basis of the creation and re-elaboration of my traditional dishes aimed at innovation. Obviously the territory is a starting point, certainly not my cage”, says De Santis.

And it is precisely starting from Campania and from its emotional origins that the Chef’s inspiration soars in wise and well calibrated flights. Its geographical and emotional origins are thus affirmed and acquire greater value: Campania warms up the whole menu with its memory dishes, its key symbols and ingredients. The perfect example is the Cappelletti signature dish as a remembrance of the traditional Sunday lunch: Cappelletti stuffed with buffalo ricotta tossed with the intensity of the Neapolitan-style meat sauce. The chef pays homage to Tuscany with the Mullet in saffron bread crust 2015, and in the Red shrimp, sour panzanella, caviar and Nocellara olive dip, where saffron and the panzanella (crusty bread slice) enrich the seafood dish. The regions of Campania and Tuscany are combined in the Charcoal-grilled pigeon (breast and thigh), black cabbage, Annurca apple, parsnip.

The tasting menus by Chef Rocco De Santis are called “Innovation Traces” (5 courses,) “Incontaminations” (7 courses), “Chef Experience” (9 courses). They bring to Florence an experienced synthesis between Tuscany and Campania that uses fish and citrus fruits as a common thread.

At lunch it is also possible to order the 3-course “Paths” menu, and the 3-course “Carte Blanche” menu with dishes selected by the Chef. 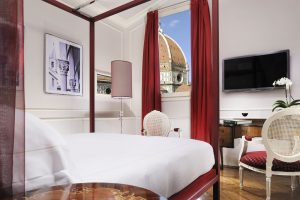 Brunelleschi Hotel The doorway opens onto a cozy square in the heart of Florence, a few steps from the Duomo, Palazzo della Signoria and the Uffizi Gallery: the hotel is surrounded by the shopping streets and the most famous museums of the city. The building includes a Byzantine tower dating from the 6th century and a medieval church, completely renovated yet respecting its original features. Inside, a private museum displays exhibits found during the tower restoration and a bath of Roman origin, now set in the foundations. The Brunelleschi Hotel is part of the Florentine Historical Businesses. The hotel has been renovated in a very elegant contemporary yet classic style, where soft shades and the gray color of the typical local stone predominate.

Read our interview with Sergio, the hotel’s Concierge who gives us his insider tips for visiting Florence.